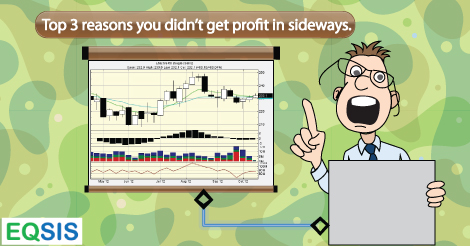 Stock traders are generally worried about the sideways movement of a stock which continues for a prolonged period of time. It is true that two third of the time market remains in a narrow range. The traders who are successful in the trending phase of the stock market become losers in the consolidation phase. Interestingly we found ‘Top 3 reasons stock traders don’t get profits in sideways movement’. 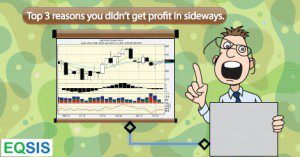 The trading system should be structured based on the trading style of the trader. Some of the classical technical indicators such as moving average; Parabolic SAR, etc tend to perform poorly during the sideways movement. Hence the indicators should be used in accordance to the market trend. Buy if you are a trend follower and if you stick to the system, then you may have to tolerate the loss during your side ways move.

The emotional influence is generally viewed as negative signs for traders. Especially when it comes to sideways movement, back to back losses might trigger trader to do overtrading. Sometime the trader takes high leverage positions in order to recover losses of the previous trades, but they fail to protect the downside risk accordingly.  The full time traders generally trade more during the sideways and less during the trending phase, but this should be other ways around to become successful. The smart way of trading sideways is to reduce the trade count.

Though it is difficult to make money during sideways, it is not impossible. One who has better emotional quotient (EQ) along with basic understanding of analysis and proper money management system can survive in any form of the trend. This can be done by trading consistently with a proper trade plan.

Kindly share your trade experience during the sideways in the below comment box. Also tag you friends who trade in stock market by sharing this in your social network.